With exams for TY’s fast approaching (January 26th and 27th), most of us aren’t prepared since this year has mainly consisted of project deadlines and sheer panic over getting our dresses completed for Junk Kouture. This blog post will hopefully give you some study tips to help you get back on track with studying.

Tip no. 1: Highlighters
Invest in a pack of highlighters, and only highlight the key words and phrase, in your notes, textbook etc. Highlighters can aid in the memory of material, especially if you are a visual learner. If you highlight the whole page it will look like a 3 year old got to your notes and coloured them in neon yellow and you won't know where to start. REMEMBER ONLY HIGHLIGHT KEY WORDS AND PHRASES!

Tip no. 2: Multi Coloured Pens
These come in handy when writing key words or for different topics within the same subject. For example pink pen for Shakespeare and blue for media studies. Doing this will make you more likely to remember material in the exam!

Tip no. 3: Sticky Notes
These will be one of your best friends from now on. They are so handy for taking quick notes or for putting definitions on them and sticking them into your textbooks or notes! They are also really handy for short to do lists.

Tip no. 4: Test Yourself
Testing yourself is one of the best things you can do. How many times have you walked in thinking you were prepared for an exam and then you sit down and forget everything you know, and all you can remember is that it is something to do with X or maybe Y…..? Well if you test yourself (you can find past papers online or use questions from your textbook) on important names and dates etc., you’ll become better equipped to handle a stressful exam situation.


Using flashcards is an easy way of testing yourself or simply just studying. Write a date or word on the front of the card, then the definition or what happened on the date on the back. Go through all the flashcards, the ones you get right go in one pile and the ones you don’t get right go in another pile. You can even get apps to create stacks of flashcards. Hopefully these tips helped you study more efficiently, and helped you prepare for exams.
Posted by Loretobalbriggan at 13:19 No comments:

We are in the run up to Christmas, with only less than 2 weeks to go, TY Home Economics students jumped at the chance to take part in a Christmas cake workshop. Ms.Ryan informed us that there were spaces left and it was now open to non Home - Economics students, I  jumped at the chance to attend. Thye next day I came in with my money to secure a place in the workshop. We went to kitchen two to make a chocolate biscuit cake, the smell of chocolate was heavenly. We put it in a pudding bowl so it would look vaguely like an igloo which was the goal of this cake. The following Monday all the students taking part showed up to kitchen two again, buzzing with excitement to ice the cakes. We were handed a bag with three different colours of icing and our cakes. Then we set off icing our cakes. The goal was to ice them to look like igloos with at least three penguins. Every student was in the Christmas spirit singing Christmas songs, while the teachers were impressed with what the finished cakes look liked. After the cakes were well documented, we cleaned the kitchen and brought our cakes home, hoping they tasted as good as they looked!

Posted by Loretobalbriggan at 08:50 No comments:

Well done to all TY English students who participated in this year’s Shakespeare Festival – an amateur drama initiative based on the celebrated works of William Shakespeare. On Wednesday 7th December last, all seven Form groups within TY performed their unique ten-minute drama productions in front of a packed audience in the school hall. This year’s group of TY students proved to be exceptionally gifted in the art of directing, acting, script writing and stage designing and some of the creative, spellbinding adaptations on show included scenes from ‘Take Me Out’ and ‘High School Musical’. Special congratulations to Ms Malone’s 4D class who were crowned Overall Winners with a memorable ‘Northside V Southside’ adaptation of ‘Romeo and Juliet’. 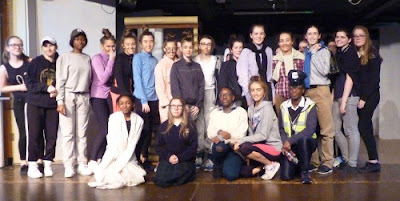 Posted by Loretobalbriggan at 08:44 No comments:

Twas the 14th of December
In the school hall
When an abundance of food was brought in by all.
The best part.. it's all for St Vincent de Paul

4th years with xmas jumpers and a festive attitude
Packed bags full to the brim with food.

All hands were on deck, carols were sung,
A sure sign that the Christmas season has begun.
A great day of fun for a fantastic charity,
Reminded us all that Christmas is a time of giving and generosity. 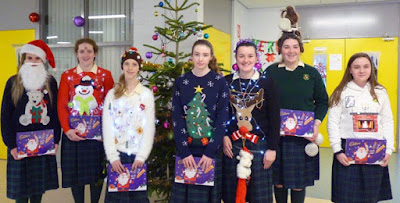 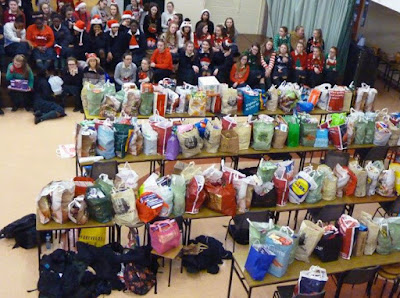 On Wednesday the 14th of December, a huge team of 4th years, assisted by Ms Gaughan and the Student Council gathered in the hall to collect and pack food for our school's Annual St Vincent De Paul food drive. All students and teachers were invited to dress in Christmas jumpers and bring in food, particularly Christmas treats, to be donated to St Vincent de Paul. In the true spirit of Christmas, both students and teachers were extremely generous and we collected a huge amount of food for families in need, bringing some holiday cheer to them at Christmas.

The hall was quite literally packed with food, from mince pies to selection boxes. We all organised the food and packed it into bags before it was taken to the local St Vincent De Paul branch. It will be distributed to families just in time for the Christmas holidays. A great day was had by everybody. There was a fantastic atmosphere in the hall, the fact that we were able to contribute so much to such a fantastic charity really helped everybody to get into the Christmas mood!

We would like to thank everybody who contributed so generously to our food drive this year. Happy Christmas!

Posted by Loretobalbriggan at 08:41 No comments:

Some of us might be sitting at home wondering “What exactly is the Santa Flight?”


If you happen to be one of those people, I can assure you, you’re not alone. When I found myself standing in Ms. Gallen’s office about a month ago, I was wondering the same thing. 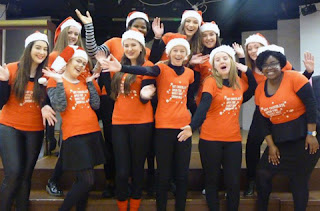 I was fortunate enough to have had the honor of being chosen to go on the Santa Flight this year, as well as nine other girls in our year. We prepared our Christmas carols and co-coordinating Christmas costumes on short notice, and before we knew it, we were on our way to Dublin Airport. We busied ourselves on board the coach with face painting and rehearsals, which made it seem like only a second before we were staring Dublin airport in the face. 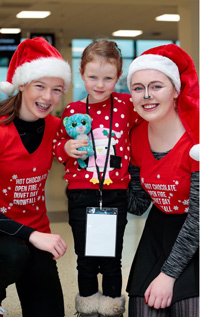 We arrived at the airport with reindeer, holly and snowflakes painted on our faces, with Santa hats on and guitars in hand. Walking through the airport embarrassed some of us momentarily as heads turned in our direction to look at our matching Christmas attire. It wasn’t long until Ms. McHugh had us belting out ‘Frosty the Snowman’ while we searched for our terminal. We had now doubled the size of our audience, but at this point we were positive any attention on us was good; Christmas had come and it was only the 7th of December.

To our surprise, we were greeted by a group of elves, members of the press, a filming crew and a choir. The place was buzzing with anticipation for the children's arrival. ‘Santa’s helpers’ (as was our official title for the day) were only a small piece of the puzzle for the Cityjet Santa Flight. Everyone was enthusiastic about making this a memorable day for the young Temple Street patients and their families. 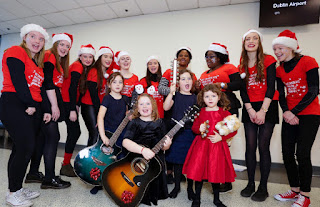 As soon as the children arrived we were in our places with guitars at the ready to play our Christmas songs. About ten songs later (along with countless photographs) we were ready to get on the plane. On board the plane the songs continued as well as extremely cheesy Christmas-themed jokes. Throughout the flight we kept our eyes peeled for Rudolph’s red nose, which would be the easiest indication of where Santa’s sleigh was. We all looked out the windows, when all of a sudden Santa himself arrived on board the plane. The children were the most excited of all of us to meet him. He spoke to each child and shook their hand, promising to meet them again very soon.

Following the flight, we headed back into the airport where a party awaited us. The children were gobsmacked to see tables full of gingerbread men waiting to be decorated, Santa cupcakes, candy canes and hot chocolate. Santa waited (along with a pile of presents) in the corner of the room in front of a huge christmas tree. The children each got their turn to sit on Santa’s lap and receive an early Christmas present. Meanwhile, myself and my fellow ‘Santa’s Helpers’ continued to sing as well as Face Painting and playing with the children.
By the end of the day we had all made loads of new friends, and loads of amazing memories. Every one of us was honored to have been chosen to go on the flight. The whole way home we talked about the children we had each spoken to and the funny little things they said to us throughout the day. The children were an inspiration to us all. Despite what the children and their families were going through, there was nothing but smiles and laughter from every one of them. It was a pleasure for us to have been able to attend such a beneficial event and we are extremely grateful to everyone who was involved.
Posted by Loretobalbriggan at 08:36 No comments: